While many collegiate athletes are trying to qualify this weekend to head out to Eugene in a couple weeks there is an Elite meet going on at the University of Oregon. Nike’s Prefontaine Classic, one of USA’s diamond league meets, has some global elite athletes competing right now.

In the pole vault we have the current World Record Holder Renaud Lavillenie, World Champion Raphael Holzdeppe, USA’s emerging star Sam Kendricks, and more. Sam Kendricks looks to be putting up a fight against the two elite veterans Renaud and Raphael. Sam to the lead with a first attempt clearance at 5.80 (19′ 1/4″) but Renaud, knowing that is an easy bar for him passes all his attempts to the next bar 5.86 (19′ 2 3/4″). Raphael also cleared 5.80 on his second attempt for a season best.

The bar then raises to 5.86 and all three remaining competitors record a miss on their first attempt. Then jumping in to the lead on the second attempts Renaud clears. Putting the pressure on Kendricks and Holzdeppe both decide to take their third attempts at 5.86 but are unable to get over the bar. Renaud then goes on to set a new world lead, diamond league record, and breaks the meet record just before he takes three attempts at his current world record.

Renaud will walk away from another Diamond League meet with the win and posting a world leading mark of 6.05 (19′ 10 1/4″). That bar will also take over the Prefontaine Classic Meet Record set by the American Record Holder Brad Walker.  Though Sam Kendricks and Shawn Barber got the best of Renaud in Des Monies during the Drake Relays, Lavillenie continues to prove why he is the man to beat.

To follow him Sam Kendricks secures the second place spot giving him a good boost on to the diamond league stage. Holzdeppe will take third. Renaud’s little brother, Valentin Lavillenie will take the fourth place position and the other competitors to clear a bar are Piotr Lisek from Poland and Konstantinos Filippidis of Greece. 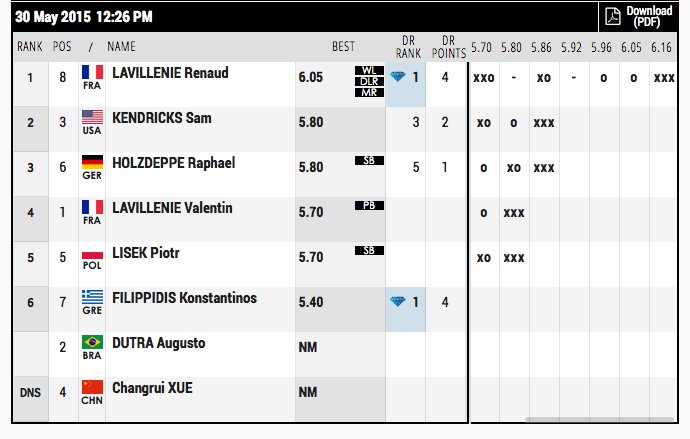