Drake Relays takes the Mall Vault to the Street 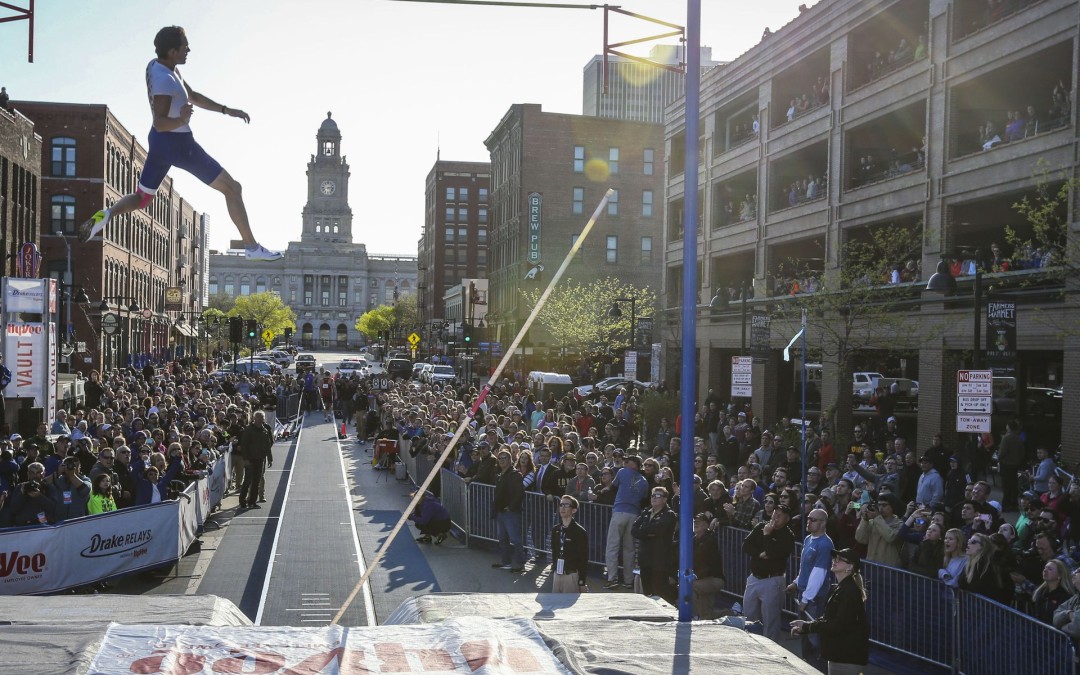 Demi Payne brought a family legacy to the Drake Relays, but a pedigree of championships and records couldn’t prepare her for Wednesday night’s Street Vault on Court Avenue.

Elite pole vaulters, including the 23-year-old Payne, were surrounded by track and field fans, downtown workers done for the day and Drake students, all hoping to catch a glimpse of the outdoor spectacle sandwiched between 2nd and 3rd Ave.

Payne’s father, Billy, broke the Drake Relays men’s collegiate pole vault records in 1990 and 1991, and her visit to Des Moines on Wednesday produced a women’s division victory and an experience to remember.

“Dad just told me to take advantage of it, because it’s one of the coolest things you can do, and he was right,” Payne said. “The crowd being right there was awesome.”

Fans crowded the tight, platformed confines of the pole vault runway and landing pad, getting an up-close and personal view of the high-flying field event before it begins heats inside Drake Stadium.

Overflow went to the nearby parking garage, providing an overhead view of the 12 athletes — six men and six women, paired up into top teams of Americans and internationals — and victories for Payne and French world record holder Renaud Lavillenie.

Lavillenie survived a slow start to top American record holder Brad Walker and clear 19 feet and 1/4 inch for a $2,500 payday.

“We’re not sure how the conditions will be this weekend, so it was good for me to take the opportunity and jump as high as I could,” Lavillenie said. “And it’s always good to compete against strong guys at a place like this.”

A swirling wind downtown delayed run-ups and dictated attempts, and made for quick evenings for most vaulters. Becky Holliday, Mary Saxer and Marion Lotout returned from last year’s Pole Vault at the Mall at Jordan Creek Town Center, but were all eliminated by the second posted height.

Akron junior Shawn Barber made it to the third height (18-1/4) on the men’s side, but the two-time NCAA indoor champion went out with Adidas representatives Steven Lewis and Karsten Dilla.

“It’s why this event is so awesome, because they bring the best athletes from across the world in and let us hash it out,” Barber said. “As an amateur, this gives me a nice taste of life after college and what it’s like to compete with the top athletes.”

The free event’s move outdoors didn’t hamper its annual staples: blaring, upbeat music and opportunities for all kinds of fans to walk in or out at any time. Shade covered Court Ave. once the de facto finals began, pitting Payne against Nike’s Katerina Stefanidi and Lavillenie against Walker.

“During warm-ups I was a little intimidated and I wasn’t taking it up,” she said. “But I told myself that I’m just as good and that I just needed to relax. Once I got in my zone this was great, and I was able to do what I do.”